As the death toll continues to climb in pandemic hot spots, MLB and other sports leagues are still scrambling to find a way to re-start their seasons.

MLB has been kicking around several proposals.

Now another possible plan is gaining attention after USA Today reported MLB is considering a three-division plan in which teams would play exclusively against division opponents.

According to Bob Nightengale, a schedule of at least 100 games would play out beginning in late June, or ideally no later than July 2.

The plan would eliminate the American League and National League for the 2020 season and would end with an extended postseason format. No other details about how that format might look were shared.

The most notable detail included is that the plan would be based around all 30 teams playing some or all of the season at their home ballpark, albeit without fans in attendance. Of course, the plan would need the approval of medical experts to become a serious consideration. Nightengale says he spoke to three anonymous executives with knowledge of talks who expressed optimism this plan could have legs. Yahoo Sports shows the alignment: 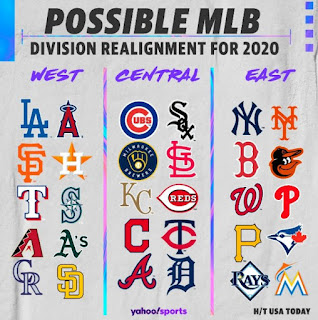 The problem is that there will still be quarantine and logistic questions for every team and every player. Will travel be restricted to buses and charter planes? Will players be able to go to their families during home series? Will homestands be longer than usual so teams do not have to travel as much? If teams can travel in a modified schedule (the travel and hotel industry have been crushed by the lock down) why not pick up the real schedule?

One would assume that all games would include a DH, to the chagrin of NL purists. One would also assume that since there will be no minor league baseball, teams will have expanded rosters (maybe up to 40 players).

But how will history take this strange solution? Will this year's records have an automatic * attached to it? Will the postseason merely be a "seeding" format for a World Cup soccer elimination tournament?

This could also be the excuse the Commissioner wants to put in his controversial rule changes that fundamentally change the nature of the game.

Playing baseball just for the sake of playing baseball to generate TV games and revenue is not the key patriotic move in this situation. Individual states are still trying to control who and what can happen in its borders. The fear of the virus contagion has paralyzed rational thought. Some states are going to start to relax restrictions while other states are going to start enforcing virus rule prohibitions. MLB owners want to salvage their season, but at what cost?
Posted by welh at 9:30 AM

Using only information in the public domain, from the sports pages, to transaction wires, to fan web sites to rumor mills, one baseball fan's management perspective on Major League Baseball, specifically the Chicago Cubs. This blog will attempt to follow the ups, downs, explosions, implosions, highs and lows of the new ownership and baseball executives running the Cubs either into the P.K. Wrigley ground or towards a championship dynasty.